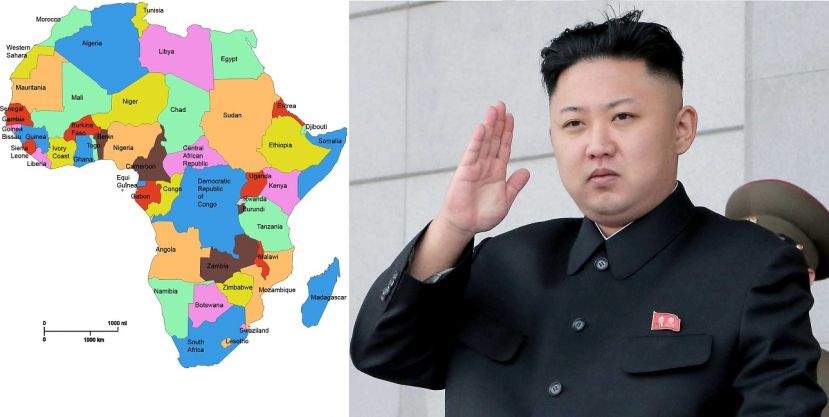 Near the southern tip of Africa, 8,000 miles from Pyongyang, this capital city is an unlikely testament to North Korean industry.

There’s the futuristic national history museum, the sleek presidential palace, the sprawling defense headquarters and the shadowy munitions factory. They were built — or are still being constructed — by North Korea, for a profit.

For years, North Korea has used African nations like this one as financial lifelines, building infrastructure and selling weapons and other military equipment as sanctions mounted against its authoritarian regime. Although China is by far North Korea’s largest trading partner, the smaller African revenue streams have helped support the impoverished Hermit Kingdom, even as its leaders develop an ambitious nuclear-weapons program in defiance of the international community.

Those ambitions led last week to the launch of the country’s first intercontinental ballistic missile. U.S. Secretary of State Rex Tillerson subsequently warned that any nation with military or economic ties to North Korea “is aiding and abetting a dangerous regime,” and the Trump administration threatened a cutoff in trade with countries that were doing business with the pariah nation.
But Namibian officials describe a different North Korea — a longtime ally, a partner in development and an affordable contractor. Since the 1960s, when North Korea began providing support for African nations during their independence struggles with European colonial powers, the regime has fostered political ties on the continent that have turned into commercial relationships.
“We’ve relied on them for help to develop our infrastructure, and their work has been unparalleled,” said Frans Kapofi, Namibia’s minister of presidential affairs.

Across Africa, such relationships have been common.

“The Democratic People’s Republic of Korea is flouting sanctions through trade in prohibited goods, with evasion techniques that are increasing in scale, scope and sophistication,” the report said. It went on to describe how “the country also uses its construction companies that are active in Africa to build arms-related, military and security facilities.”
North Korea’s commercial relationships are only one sign of the surprisingly close ties many African leaders have with the secretive, highly repressive Asian country.

Yoweri Museveni, Uganda’s longtime president, said he learned basic Korean from Kim Il Sung, the former leader of North Korea and grandfather of current leader Kim Jong Un, during various visits to that country. Zimbabwean leader Robert Mugabe sent two rhinos to Pyongyang, the North Korean capital, as a show of solidarity in the 1980s (both died shortly after arriving). In Maputo, Mozambique’s capital, the street “Avenida Kim Il Sung” runs through the heart of downtown. In Namibia’s national museum, a black-and-white picture of a North Korean soldier leading a group of local soldiers hangs in the foyer.

“Our world outlook was determined by who was on our side during the most crucial time of our struggle, and North Korea was there for us,” said Tuliameni Kalomoh, a senior adviser in the Namibian Ministry of Foreign Affairs and the country’s former ambassador to Washington.
In recent years, African countries have struggled to maintain their ties to North Korea without alienating the United States, the largest aid donor on the continent, or publicly violating U.N. sanctions aimed at curbing the country’s nuclear-weapons program. In measures going back a decade, the United Nations has barred countries from contracting with North Korea for military training or services or arms manufacturing.

“Pyongyang’s ties to Africa allow it to show it still has friends abroad and benefit from their political support. They also represent a source of revenue, new entry points into the international financial system, and a haven in which to base North Korean representatives and front companies,” said Andrea Berger, a North Korea expert at the Middlebury Institute of International Studies at Monterey.
The Namibian government has spent about $100 million on North Korean projects since 2002, according to officials here — a sum that goes a long way in an Asian nation where per capita income is about $1,000 per year. But in comparison, China imports about $3 billion in North Korean goods per year.

Last year, the United Nations said that Namibia had violated U.N. sanctions by maintaining its commercial ties to North Korea.

Among other activities, Namibia had contracted with a North Korean company called Mansudae Overseas Projects to construct a munitions factory as well as a new military academy. A company with links to Mansudae, called the Korea Mining Development Trading Corporation (known as KOMID) also worked on the munitions factory, according to the U.N. report. The U.S. Treasury Department last year called KOMID North Korea’s “primary arms dealer” and sanctioned two North Korean officials based in Windhoek. The department also sanctioned Mansudae, calling it one of a number of companies that sent workers abroad in part to earn money for the government or ruling party.
After being accused of violating sanctions, Namibian officials pledged to cut commercial ties with North Korea, which is formally known as the Democratic People’s Republic of Korea, or DPRK. The Namibian government said in a statement in 2016 that it “remains committed to the implementation of all U.N. sanctions resolutions,” but added that “the warm diplomatic relations with the DPRK will be maintained.”

Over a year later, it appears that North Korean guest workers are still laboring on Namibia’s new Ministry of Defense, a large concrete building just outside of Windhoek’s city center, according to several residents who live nearby.

“We see them every day or two,” said one resident who spoke on condition of anonymity because he didn’t want to be seen as criticizing the government. “They never left.”

In interviews, government officials said they were hoping to complete the current projects before expelling the workers — even though allowing the North Korean contractors to linger would likely be a violation of U.N. sanctions if they are still affiliated with KOMID.

“We are definitely towards the end of phasing them out,” said Kapofi, who added that he could not confirm the presence of the guest workers at the defense ministry.

Nikki Haley, the U.S. ambassador to the United Nations, recently warned that the United States might cut off trade with countries that were violating U.N. sanctions by doing business with North Korea.

Namibia did $469 million of trade with the United States in 2013, the most recent figures released by the Office of the U.S. Trade Representative. The U.S. government also contributes to Namibian health-care initiatives, particularly related to HIV/AIDS.

“As a part of our maximum pressure campaign, we are committed to ensuring that DPRK’s arms-related exports, assistance, training, and support activities are terminated, including in Africa,” said State Department spokeswoman Heather Nauert, in response to a question about Namibia’s ties with North Korea.

Other African countries were also supposed to end their economic and military relationships with North Korea after the U.N. sanctions were imposed. But it remains unclear whether some have done so.

U.N. member states are obliged to issue reports describing their efforts to enforce sanctions. But the U.N. panel of experts report in 2016 noted “an extremely high number of non-reporting and late-reporting States” and the “poor quality and lack of detail of the reports received.”

Some African nations have appeared to distance themselves from North Korea. After photos appeared showing North Korean military trainers wearing Ugandan military uniforms last year, Uganda’s foreign minister, Sam Kutesa, said on state television, “We are disengaging the cooperation we are having with North Korea, as a result of U.N. sanctions.”

Even if North Korea’s commercial ties to Africa do eventually fade, relics of the engagement will endure.

In Dakar, Senegal’s capital, a soaring, North Korea-built statue — larger than the Statue of Liberty — rises from a hilltop, depicting a man holding a baby in one arm and embracing a woman with the other. When the statue was unveiled, it angered many people in the Muslim-majority nation, as the woman was scarcely clad. Other North Korean statues, mostly of African revolutionary leaders, were sold to Mozambique, Zimbabwe, Botswana, Benin and Congo. U.N. sanctions introduced in 2016 barred countries from buying any more such statues.

One of the biggest projects is the war memorial outside of Windhoek, where a towering bronze statue of an unknown soldier carrying a rifle stands in front of a slim obelisk. On a recent sunny afternoon, there were no visitors at the park, and one guard slept on the steps.

But from the top of the monument, the view was clear: the city and the rolling hills in the distance, and in the foreground a North Korean-built military base.