Africa: Trump's Friends 'Trying to Get Rich' in Africa Should Be a Wake-Up Call Featured 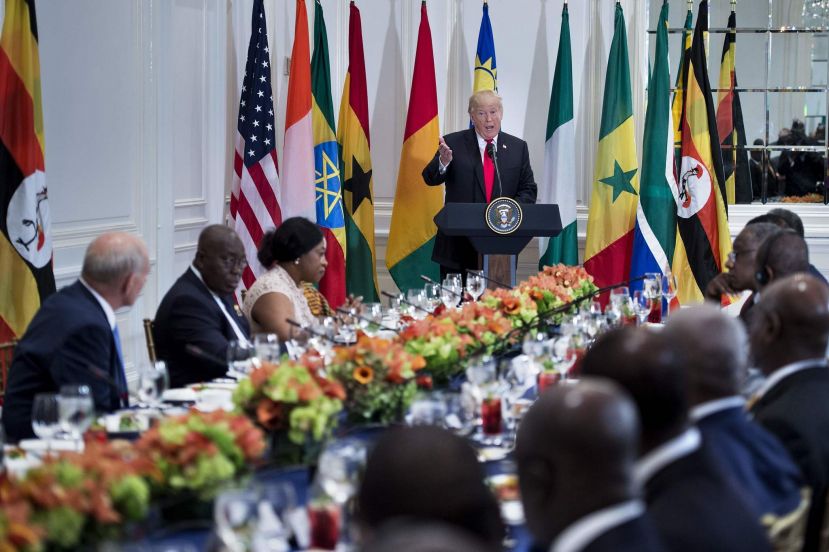 Last week, a speech by US President Donald Trump to African leaders revealed once more the intentions of some Western "investors" in Africa.

According to the President, who spoke during an event at the UN General Assembly, his "friends" go there "trying to get rich".

Although he did not elaborate, it was enough to make the delegates angry, considering that the continent is still dealing with the legacies of colonialism, exploitation and slavery.

The President's speech echoed discussions at the Berlin Conference of 1884, which partitioned Africa for the colonial powers, setting the stage for colonisation in earnest.

European imperialists conquered Africa through a combination of religion, exerting diplomatic pressures and outright military invasions. Although Africans resisted foreign dominance, much of it was captured, except Ethiopia and Liberia.

The primary purpose of European aggression was economic exploitation. Domination meant that Europe would ensure expansion of its capitalist industrial revolution, develop guaranteed captive markets and secure an assured source of raw materials. They succeeded beyond their imaginations.

By the time of their departure in the mid-20th century, the damage from colonisation was so extensive that even today, after more than 50 years since their departure, Africa still is mentally enslaved and unable to shake off the chains of European cultural dominance.

We face a much larger crisis in the 21st century than we did in the late 19th century, when Europe invaded Africa. Television, which was supposed to be the medium of African cultural renaissance, has been flooded with a multitude of channels that have nothing to do with African aspirations.

The few who bother to watch TV are glued to either European football or global news channels because they have more faith in BBC or CNN than they do in local news channels. We spend hours and money we don't have betting on games in the English Premier League, Serie A, Bundesliga and other leagues.

It is such continued appetite for Western products that prompts the likes of President Trump to call for re-colonisation of African countries for "another 100 years because they know nothing about leadership and self-governance." He justifies his position by stating that these people (Africans) "import everything including matchsticks."

Such rhetoric, in my view, should be a wake-up call for Africa to embark on value addition to her raw materials as well as ensure food security for her people. The consequences of Africa's indifference to developing a self-sustaining environment have not yet been felt yet.

Traditional television, for example, will have difficulties maintaining its talent as advertising shifts into other platforms, unless it seeks new business models.

More than ever before, African governments must invest in social infrastructure as a strategy to increase productivity in local content creation, develop incubation centres to enhance quality productions and encourage collaborations across countries to increase market size.

The tragedy is that no one in Africa is concerned about the implications of the growing influence of foreign cultural material on an entire citizenry. The enabling legislations that was meant to encourage greater local content is obsolete and irrelevant.

Foreign movies influence the emergence of cuisines in major cities, and as a result, new food chains now dominate city landscapes across the continent. Many of these chains have increased the variety and volume of content, with improved quality. They create content for African countries, thus telling the African story from their own perspectives.

There is still a window for Africa to leverage these many channels to develop quality, relevant content that appeals to Africans. In film, India and Nigeria have done it simply because of a large domestic market.

East Africa, for example, could easily be developed into a cohesive single market to sustain the development of a film industry. Since Swahili is widely used, the cost of producing could be much lower than even Nigeria, since the market is larger.

Using technology, we could perhaps eliminate one of Africa's greatest problems - lack of foreign reserves - to trade with other countries. Most currencies are pegged on gold reserves, but Africa needs its own equivalent of Bitcoin.

Until Africa figures out enabling payment methods and how to improve her intra-Africa trade, the size of market may never matter. Cryptocurrency could be the disruption Africa is waiting for to change the livelihood of her people.

We may have not figured out how to be paid for services rendered to Congo but we have figured out to make payment to these platforms even before they set foot in Africa.

If we can't stop live-streaming dubious content, we should figure out how we too can contribute to the global body of knowledge, rather than being mere consumers. Could we not use our access to the Internet to improve our agricultural output, for instance?

We should strive to generate knowledge and solutions, and by extension, generate employment and improve our quality of life.

These challenges may be hidden opportunities but as Michelle Obama says, "You should never view your challenges as a disadvantage. Instead, it's important for you to understand that your experience facing and overcoming adversity is actually one of your biggest advantages."

We have reason to turn adversity into an opportunity by taking insulting speeches as a wake-up call for Africa. The continent should reconsider her future and rally her citizens into a common course of leveraging her enormous resource base into becoming a major player in the days to come.

The writer is an associate professor at University of Nairobi's School of Business. Twitter: @bantigito