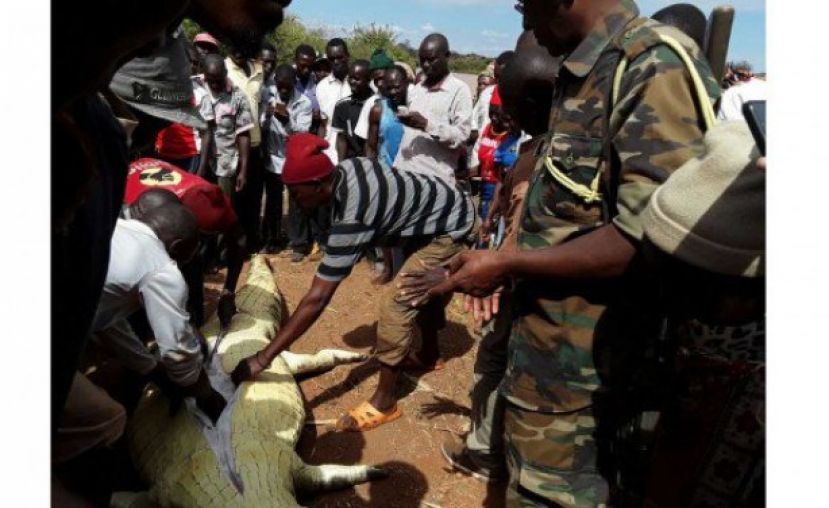 In a bizarre incident, Kenya Wildlife Service (KWS) wardens in Embu have killed a crocodile to look for the body of a seven-year-old schoolgirl inside its stomach.

The unlucky girl was mauled by the animals as she drew water from Kiambere dam in Embu County.

However, the officers did not find the body of Mawia Mwendwa King’ola even after opening the belly of the fat reptile.

The Class Two pupil at Karura Primary Karura village was killed Tuesday evening as she and other children drew water in the seven fork dam at around 6pm.
On Thursday, villagers who have been keeping vigil at the shores of the dam, said they had seen a crocodile eating the body of the girl.

There was short-lived joy as the KWS officers gunned down a crocodile which they suspected could have swallowed the girl’s body owing to its huge size.

However, they did not find the body inside its belly.

The girl’s father, John Mwendwa appealed to the officers to accelerate the search, hoping to find the body for burial.

Tony Mutinda, a resident, narrated how they desperately watched as the crocodile ate the girl’s body.

“There was nothing we could have done. These animals are very vicious and have been attacking our livestock. They were tearing the body as we watched at night. We tried shining light using torches but they were unmoved,” he said.

He said that on the fateful night, residents were pelting the crocodile with stones in the hope that it would release the body.

“People are informing me that they spotted another crocodile joining the one that dragged her,” he said.

The MCA said human-wildlife conflict had increased since residents did not have piped water and have to rely on the crocodile infested dams where tens have lost their lives or maimed.

He said people were planning to hold demonstrations to force KenGen, which manages the dam for hydro-electricity generation, to supply residents with water.

“We have been lobbying for supply of piped water but it seems as if KenGen is only interested in tapping electricity while we suffer. We will keep on reminding them that it is their social responsibility to provide us with water,” said Mr Mwaniki.