Faure Gnassingbe or Winnie, the Flu:   TO BE DASHED & SLANTED Featured 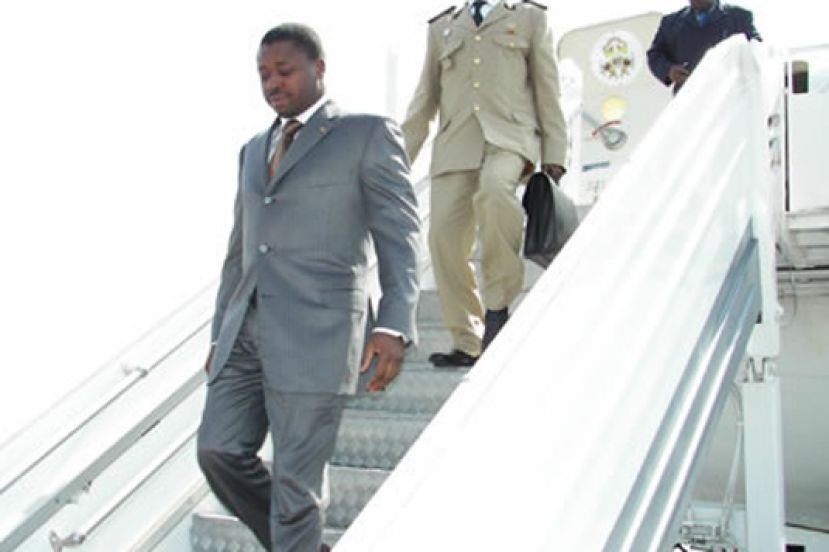 Where dwells our fate! The so-stagnant stalemate within Togo benefits no-one, almost. When people decry, one is to ear [SIC] the echoes of the crying souls.  Two tugs stare angrily at each other. The winner takes it all. We the people of Togo echo, no injustice along our fateful wills. The people of Togo speak and spew the regime of Gnassingbe.   There is a flare-up, every so often. The militia’s heart hardened, evil-commanded will fire at all cost; the cost penniless fortifies us. To our understanding, nothing more or less will make the iron-seated unmoved. The regime is hardened to the cries of its people. We will retaliate with mushroom marches, the firing rifles and the artillery barrage are just what makes up believe that negotiating with the crooks and cronies is not an option for our freedom. We march to dislodge the regime and kaput it from the ground up.

As over and over, as ever, there are deaths. An add-on to those thousands who lost their lives so-tragically in the fight for freedom in Togo. The past moves us not to surrender. Nor is the current status-quo a lesson learned. Nothing moves beyond. Nothing is archived until something is achieved. The RPT-UNIR utterly pointless resistance to grasp to power is the confrontation that no-one can resolve, but only through the unified resistance of Togolese.

Game theory, as explained by Thomas Schelling, “Two or more individuals have choices to make, preferences regarding the outcomes, and some knowledge of the choices available to each other and of each other’s preferences. The outcome depends on the choices that both of them make … There is no independently ‘best’ choice that one can make; it depends on what the others do.” And we will not compromise any longer. They will maximize their gains in any and all things - negotiations.

Individuals, groups, states and other entities negotiate for a variety of reasons: to resolve conflict, to gain an advantage, to achieve amicable relations, to maintain peace and avoid war and so on.  Successful negotiations often result when the parties operate on basic principles of fairness, good faith, trust, honesty, integrity, and a commitment to promote mutual benefit and satisfaction for a win-win outcome. But none of these parameters apply to zero-sum games. Purification roots in negotiations to resolve conflicts, to gain purity not punitive, to achieve win-win, to uphold peace and avoid social warfare and so on.

The regime RPT-UNIR, fearing to lose authority and face, refuses to relinquish power – pan-holding for further talks. We, Togolese argue, quite correctly, that negotiating with evil-corrupts will no longer be an option. Enough! Lives have been lost and disrupted. We must get what it asked for. Faure Gnassingbe and his cronies must speed up their kaput.

Within our memories, so much for the past lives us; yes it is the unbalanced power separating us. Your wasteful confrontation amidst the bullets that graze us fear us not. What separates the RPT-UNIR and his cronies from the peasant Togolese hangs ghosts-like, ready to explode.  As the regime of Gnassingbe casts a terrible repellant over us, we urgently request to defeat for we gnash no longer.

As we grow tighter and unified, the regime is sealed.  The winner takes it all. The thousands of Togolese on streets are determined. We are determined not to entrench. We will not budge.  I am certain in the bird-minds of the cronies, miraculous deals are being fetched and hatched. I am sure. Time is the essence to showcase the crooks are grown up.

Can the status-quo, stalemate come to an end?

Obviously, yes. It's fading; it's ending. Nothing lasts for long-ever. As Percy Bysshe Shelley’s poem, Ozymandias.

I met a traveller from an antique land

Who said: Two vast and trunkless legs of stone

Stand in the desert. Near them on the sand,

Half sunk, a shatter'd visage lies, whose frown

And wrinkled lip and sneer of cold command

Tell that its sculptor well those passions read

Which yet survive, stamp'd on these lifeless things,

The hand that mock'd them and the heart that fed.

And on the pedestal these words appear:

"My name is Ozymandias, king of kings:

Look on my works, ye Mighty, and despair!"

Nothing beside remains: round the decay

Of that colossal wreck, boundless and bare,

The lone and level sands stretch far away.

Yes, empires crumble. Fury regimes do fall. Iron-kingdoms dust. And people endure. The people of Togo remain robust.  In fact, far more united than before. The crooks have bird intelligence. The cronies murkily share some traits. Their stubbornness and inflexibility to shoot and kill, and a secretiveness in blooding as they thirst.  The vampires adore quailing.

Unbeknown to them, our deep-seated bitterness drives us on-shore. No armored-gun can move us an inch.  All we require is political will. We are determined to end the stalemate and put the past behind us. We now know that our painstaking anger is up. Let it therefore end. And it must end now before further suffering is inflicted on the land of our forefathers. Slanting us is – of course – only a good beginning. For, there is no timetable. We only request the regime to fade deep out-off our mighty land.

As the regime vows blasphemies upon the recent appeal from church leaders, the delusional political posturing and showmanship at its best is a foolhardy misunderstanding and underestimation of the power of God. The crony dictatorship is clueless. Evil amounts their bird-mind. We must stave off the total collapse because they cling to power even when the life support is decaying. They will not relinquish power.  And if push comes to shove, they will shovel to the last second to defend their Potemkin Village. They are living one day at a time.

The inexorable finish-line and withering away of RPT regime, once a cakewalk to power for Faure Gnassingbe, could now hasten its bitter departure from earth. As Togolese dust for their freedom, we dig deeper Faure Gnassingbe.

Frederick Douglass once laid it, “Those who profess to favor freedom and yet depreciate agitation, are people who want crops without plowing the ground; they want rain without thunder and lightning; they want the ocean without the roar of its many glasses of water. The struggle may be a moral one, or it may be a physical one, or it may be both. But it must be a struggle. Power concedes nothing without a demand. It never did and it never will.”

Togolese are no longer emotional; we are cerebral. Just to be crystal clear, there is nothing wrong to walk to our freedom. The massacres and raging against RPT-UNIR crimes against humanity is the mantra that irons us.

My minutes go out to misEvil Cinamon Lawless, the goddess of intraniette [SIC] as she is skilled in fairy tales. Apeer [SIC] than all apes, you must be taught some good old tricks that no longer work. Your ass is just a piece of rag on fire. You can canonize on being the asshole you are. Time and time, you will become an ape, noonering [SIC] at daylights. Cutting of internet services is what I call resentment; drinking a teaspoon of poison and hoping it will kill us. The goose's good is the gander's good. Keep it in mind.

Einstein states: “If I had an hour to solve a problem and my life depended on the solution, I would spend the first 55 minutes determining the proper question to ask, for once I know the proper question, I could solve the problem in less than five minutes.”

For us, we've spent 50 years canonizing on your rough-rag regime. Our answer echoes our sole determination to grab the regime RPT-UNIR to offshore. In the end, what truly matters is not the size of the armored-gun. What truly matters is what we mutter. It's the courage to confront the oppressor. We are determined to free-up the chuckles to boredom. Togolese are change-hungry and thirsty.